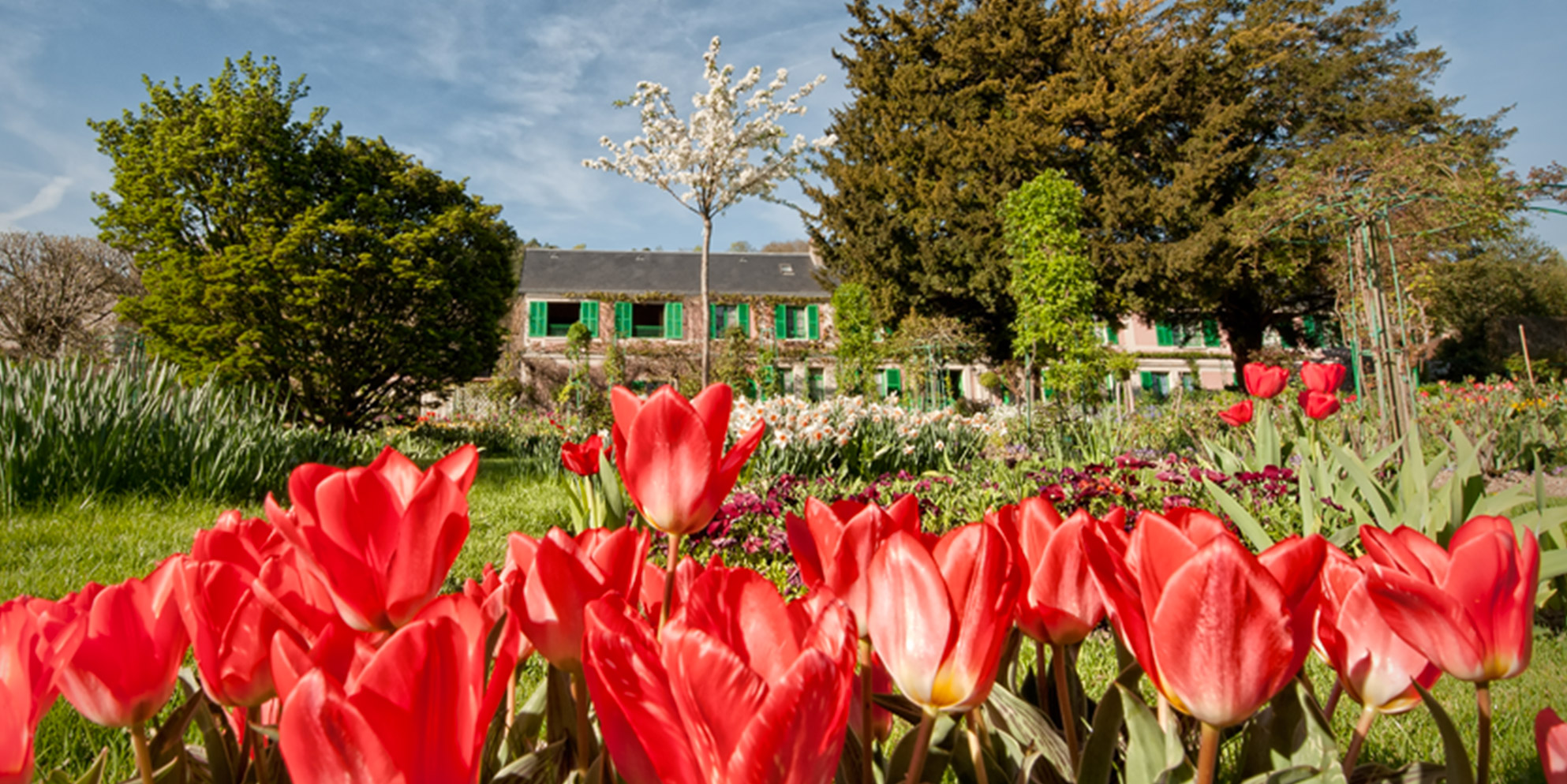 “The tide of history has its own facetiae. Located at the gates of Vernon, which was once a major commercial port, Giverny is an ancient village living at the immemorial pace of country life and did not seem destined to a glorious fate.

Over the centuries, everything that happens happens nearby, a little further, but Giverny is never at the forefront of the event. It steps into the limelight thanks to an artist and not because of any explorer, holy martyr, inventor or victorious general. Monet lived here half his life. He chose Giverny in order to run away from the world and it was this world which caught up with him. It was then all over for torpor and immobile time.

The kind of society drained by his presence, his friends from all over did not create agitation. It was the smouldering rumour in the various painting academies of Paris and at the Ecole des Beaux Arts (Academy of Fine Arts) which would make this village a place to be, invaded by crowds of artists, mostly Americans who were seeking to learn from Monet, who didn’t want disciples.

The inn would host Mary Cassatt and Cézanne, Monet’s friends, together with others prestigious and curious characters such as Calder’s father or Berenson. Waves of people from all horizons, from Isadora Duncan to Maurice Sachs and Aragon rented houses.

The international conflicts put an end to this excitement. The world was ageing and people with it too. After Monet’s death, his son Michel, his stepchildren, Blanche and then Jean-Pierre Hoschedé carried on his memory. With the passing of Jean Pierre Hoschedé in 1960, the difficulty of maintaining the property from afar occurred very soon.

In February 1966, as every month, Michel Monet leaft his dazzling garden through the Eure flows at Sorel-Moussel in order to resolve stewardship issues at the paternal home. After having tea with Germaine Hoschedé-Salerou, his stepsister, he who was among the first to cross the Sahara by car, set off home and died in an accident on the way, in Vernon, he was then 88 years old.

He had taken advice from André Malraux. In his will he bequeathed the property of Giverny to the Académie des Beaux Arts of France. His father’s paintings join, very logically, those left by his friends and patrons Dunop de Monchy, Georges de Bellio, to the Marmottan Museum.

In Giverny, all the door and window frames and the water garden bridges were repainted, unfortunately the house and the studios were suffering from dampness ; The Clos Normand and the Pond were maintained to a minimum, The lawns were mowed, but Monet’s garden belonged to the past. A significant restoration was essential. Funds should be raised and a lot.

In the 1970’s, it was hight time to record memories of the people who had experienced these places in their glory. Jean-Marie Toulgouat, Alice Monet’s great-grandson, with the assistance of an American friend,painter of the School of New York, took the measurements of the gardens, working with their decimetre.

And then, plant lists, season by season, were established under the guidance of James Butler, whose mother was Suzanne Hoschedé-Butler, also known as The «Femme à l’Ombrelle » (Woman with Parasol). Butler was both a botanist and Japanese art lover and exporter. The research is fascinating = writing his memories down, studing his drawings, and then gathering Mr.Devillers’s memories, having access to iconographic archives thanks to the generous and efficient help from Mr. Le Flour and Mr.Fuchs from Truffaut.

This house had the good fortune of being entrusted to Mr. Gerald Van der Kemp, of the Institute.
He was in Versailles, he took over Giverny. He truly loved flowers, gardens and composing bouquets. He gladly exchanged the cosmopolitan and frantic demands of the city life, as « a cultural ambassador » for the quietness of a country library. We would often see him in the evening, sitting on a bench and conversing with the Head Gardener : the only one holding back in the race

Obviously, he was given the research. Well used to the demanding nature of Versailles, Mr. Van der Kemp equipped himself with a pilgrim’s staff : numerous back and forth trips between United-States and Paris, charity dinners, everything done to convince sponsors. They were generous and plentiful.

Supported by his American wife, Florence, to whom we have to pay a warm tribute, Mrs Gérald Van der Kemp had the genius idea of getting from the Administration of her country tax relief for any amount paid by an American citizen for the restauration of Versailles. To this she added Giverny, thereby forming and presiding the Giverny-Versailles Foundation, which would attract a massive amount of money commensurate to the vast sums needed.

Thanks to which, the unknow, famous people, art lovers, garden friends, the whole world has rushed, to quote the Duc de Trévise (The Duke of Treviso) in order to « make the pilgrimage to Giverny ».